salt your way to health 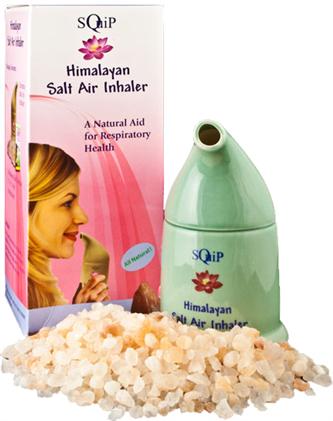 Try what Dr. Oz called one of the two alternative health secrets of 2010

Modern lungs are under stress from air pollution and a wide range of toxins. Dr. Oz recently named Himalayan Salt Pipes, as one of the two alternative health products he is planning on using this year that he previously had not used. He mentioned that Himalayan table salt differs from table salt in that it is pure. He states that it has, “…no contaminants, no anti-caking agent, it’s all natural, and has no pollutants.” Because of this, Dr. Oz further states, Himalayan salt pipes “are helpful for asthma, allergies, sinus conditions,… and because it has potassium which decreases blood pressure, it may be helpful for that, too.”

Dr. Oz Recommended! The benefits of salt as a natural cleanser have been known for millennia. The benefits of salt air inhalation, also known as speleotherapy or halotherapy, were first documented over 200 years ago in  when it was realized that salt miners were relatively free of respiratory ailments. Since then, many people have been flocking to salt mines around the world to help rid themselves of respiratory ailments of all kinds including asthma, congestion, hay fever, and allergies. Salt is known for its anti-microbial, anti-bacterial, and anti-fungal properties. Here in the , such treatment is only now starting to become more widely known and appreciated with the introduction of "salt rooms" in spas and other wellness businesses.

You can now benefit from this all-natural salt air therapy at home with a Himalayan Salt Inhaler. This high quality ceramic salt air inhaler comes with 7.75 oz. of pure Himalayan Crystal Salt (enough to fill the salt inhaler 3 times) and a full color instruction sheet. Not only is this salt inhaler good for you, it also makes a very thoughtful and beneficial gift.

What is Salt Inhalation Therapy?

Also known as “Halotherapy” (halo = salt), salt air inhalation therapy is an easy-to-use drug-free method that eases symptoms of respiratory discomforts. It is also called “Speleotherapy” (speleos = cave), as the salty atmosphere of deep salt caves has been used for centuries to benefit the respiratory system. Today’s salt inhalers were designed to recreate a similar micro climate – providing salt cave therapy without actually having to venture deep into salt caves.

A few minutes of regular daily use can:

Do you suffer from:

Salt is the mineral of life!

Have you ever wondered why people living around areas such as the  , and other bodies of water high in salt content tend to have healthy skin, few respiratory issues, and overall well-being? SALT!  Without salt, we can’t live!  In fact, we are partially made of salt as our bodies naturally produce 0.9% of this life mineral.

The benefits of salt air inhalation therapy were first documented in  in the 19th century and the many benefits are well known in continental  where they believe that dry micro particles of salt and minerals can treat respiratory ailments such as asthma, allergies, and many other respiratory ailments. There are numerous “salt caves” throughout Europe such as Wieliczka in  , Hallein in  or Praid in  – and even some in . A spell in the salt mines, once regarded as punishment for dissidents committing offences against the state, is now a high tech treatment center for those with respiratory ailments. The salt mines in the  and have been transformed into modern luxury clinical centers providing treatment for over 10,000 people per year. Temperature in the mines is steady all year round at 22°c, residents sleep on beds in alcoves carved out of the salt.

What led to the discovery of salt air therapy?

It is a fact that salt miners rarely suffer from tuberculosis or respiratory diseases and it was this discovery that led to the development of speleotherapy - which means to be located in a room or area with a presence of salt crystal rock and to breathe the ionized air.

“Therapy” in Your Own Home!

How does it work?

Rock salt crystals are placed between the filters inside a refillable inhaler. As you inhale through the mouthpiece, the moisture of the passing air absorbs microscopic salt particles which permeate through your respiratory system. The humidity in the air is sufficient to enrich the air with minute salt particles when the air passes the salt crystals. Hence a micro-climate of the curative salt caves has been created.

The Himalayan Salt Air Inhaler has many advantages: